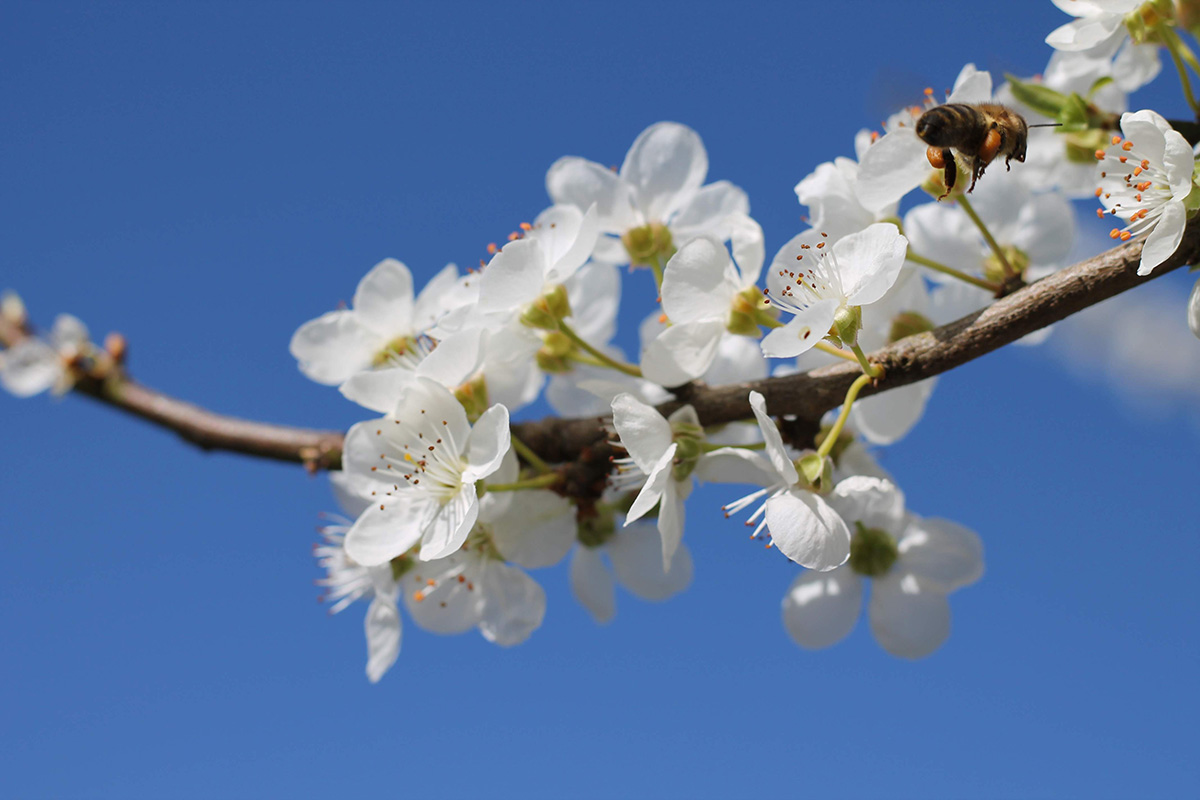 It’s been one month since Germany closed its borders to neighboring countries, one month since we’ve been able to visit the Kleingarten located only 200m (660ft) in Switzerland. It’s a little sad not being able to observe the garden transition into spring. Around this time of year the fruit trees are blooming and it’s the perfect time to celebrate spring by cooking food over a fire. We were lucky enough to enjoy a small picnic, with proper social distancing of course, under the flowering plum tree the day before the closing.

When we left, the onions and raspberry brushes were awakening from their wintery slumber and we noticed the tiniest of seedlings popping out of the prepared meadow areas from the fall. They were so small that it was undetermined whether they were in fact the meadow seedlings or weeds, though I have the sneaking suspicion that the birds might have helped themselves to the seeds over winter. If we had access to the garden to see if they are weeds, we could have cheated and sowed another round of the mixes and protected them from the birds with a thin layer of fleece until germination.

The garden probably looks a bit rough at the moment with overgrown grass, but we enjoy its wild look and in the past have even put off mowing a few extra days to enjoy the casual nature of the space. Before the border closing, Dan, a member of the Schrebergartencrew, sowed peas, carrots, cilantro, spring onions, spinach, and potatoes, of which the carrots and peas had already begun sprouting.

I’m confident the vegetable seedlings will do well in our absence, so long as the slugs show some mercy; I am slightly concerned about the meadows sown last fall, as they are supposed to be mowed by mid-May for the success of the project. It would be a shame to see the hard work from the garden crew go to waste, but there is a more concerning issue that needs to be carried out by June: the winter rye cover crop.

For the three sisters project—corn, beans and squash—we sowed a cover crop of winter rye Secale cereale and hairy vetch Vicia villosa in September 2019. Cover crops suppress weeds, protect the soil from the winter elements, and improve soil structure when chopped and dropped or rolled and crimped the following late spring. As a grass, winter rye usually grows back when you cut it, but it won’t if cut at a certain time, and this trait makes it an easy annual cover crop. And the time of the cut varies from year to year based on the weather.

How it works: the rye grows in the vegetative state from late summer to early spring. Then when daylength reaches 14 hours it’s triggered into the reproductive state of forming flower heads. Part way through seed maturity, during the milk stage, is the time to cut the rye. The ‘milk’ is the nutritious sap sent up from the roots and body of the plant; it’s the perfect time to cut because the movement of sap makes the plant think it has fulfilled its purpose producing the next generation. Cut the rye too early, the roots still have the nutrients and energy to grow vigorously in order to produce another seed head. Cut the rye too late, you lose the benefit of storing the nutrients from the decaying roots in the ground because all the nutrients will be in the seeds above ground and the seed might spread.

Depending on how warm or cool the spring is depends on whether the chop and drop occurs in May or June, at least in our area; it is not done on a specific date in the year. Last year we chopped it in early to mid-June; this spring we’ve experienced some lovely almost early summer-like weather so the rye might need cutting in late May.

The maturing winter rye seed heads are also a wonderful indicator of warm temperatures and tell you, as a gardener, that it’s time to plant out the warm season crops such as the three sisters, tomatoes, peppers, sunflowers etc. I’m nervous about spreading the rye to the three neighboring plots. Once the milk stage begins, there is a 2-3 week window to cut the plant and if the German-Swiss border stays closed by mid or late June, I feel we will have a headache later in the year with the neighbors.

Though we haven’t been able to visit the Kleingarten, the Balkongarten has taken off! The flowering waves of Blumenzwiebel are a joy to observe now more than ever during these uncertain stressful times. The miniature irises and crocuses were a beautiful first act followed by the lightly scented grape hyacinths and anemones with the now grand finale of tulips. Behind the scenes of the spring bulb performance the herbs, leafy greens, and flower seedlings are germinating for their mid spring and summer debut.

This is my fourth year container gardening and second year seed growing, and so far there’s a noticeable improvement in my abilities, everything seems to be faring much better than previous years. The major change I’ve made is consistent fertilizing with liquid seaweed and adding a top dressing of worm compost to the pots. But I believe the biggest contributing factor to the improvement is the focus. My attention is not divided between the Balkongarten and Kleingarten at the moment, giving me more time to make mistakes, act quickly, observe, and learn from them. It’s also allowing me to accomplish tasks, such as potting on, at the correct time.

This year’s balcony plan was supposed to focus on herbs, leafy greens, and a few flowers but due to the circumstances I’m growing a tomatillo, a few tomatoes, carrots, and parsnips as well. In fact, because of the extra time at home, I thought of a way to squeeze more plants on the balcony by creating a string wall for the spring peas and summer beans to grow up. Will it be a problem to lose my focus growing a few vegetables on the balcony this year? Probably, but that’s the beauty of learning.

And with the extra plants comes the shrinking of space. I’m facing the small-space dilemma many gardeners are experiencing: not having enough room for all the seeds that were sown. This is not the worst problem to have, for the seedlings bring us joy and they are a way to spread joy to the community, which is needed at the moment. If you feel comfortable and have extra seedlings, set them on the street with a sign stating “free seedlings” or in my case “Setzlinge zu verschenken.” Be sure to wash the outside of your pots with a mild soapy mixture to prevent the spread of the virus, being careful not to get soap on the soil. Your seedlings will brighten someone’s day on their walk outside the home.

It’s important during this time not to lose hope. We will get through this crisis and become stronger as a result. I hope you are staying safe and if you’re feeling stressed, remember that a garden, whether it’s a large plot of land or two pots on a windowsill, is there to help soothe an anxious mind.

If you have any questions or comments, please reach out! I love connecting with other gardeners and like-minded people around the globe! You can find me on Twitter or Instagram, or email me directly at hereisthedill@gmail.com.

If you are as nerdy and passionate about gardening as I am, welcome! I’ve always worked in gardens and I’ve always been curious about the "why" behind many processes in the garden. Plants and their interactions with the world fascinate me, and this website is an exploration of the nagging questions that we all come across while gardening. I really want to gain a deeper understanding of the biological, ecological, and chemical mechanisms at work in our gardens, as well as the agricultural and environmental topics surrounding food, in order to become a better gardener and a more conscious citizen of the world. Successes and failures will be shared along with any research behind them. Join me!

During my final years at college, I created a crude version of a bullet journal to keep track of all the various classes and activities. That planner was a life saver. Post college I stopped using the planner as the activity level dropped; but in the past few years, I found myself needing to record events and thoughts again, and came across bullet journaling. It has really helped keep life organized, so in the spirit of staying organized, I decided to create a garden journal using the same techniques. ...Keep reading

Balkongarten in August I think it’s important to reflect on the successes and failures of the 2019 Balkongarten. Taking a few moments to reflect will help me realize where to focus my efforts next season in order to grow as a gardner. Be sure to take some time to reflect on your growing season or, if you’re new to gardening, imagine what you’d like to accomplish for your first season. ...Keep reading